April 08, 2020
This article talks about Letter from Birmingham Jail Short Summary. The Birmingham protest was held in the same period as the Easter shopping season and it was scheduled this way in order to boycott commercial establishments. The opinions about the protests were very different both among white and black people. 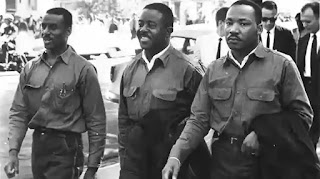 It is interesting that part of the black population wasn’t enthusiastic about this protest and a local black-oriented newspaper even accused Kind of acting out of selfishness because they have seen this protest as King’s attempt to gain more publicity.

Another argument against this protest is that it could devalue the slow progress that was made during the last years in the area of civil rights for black people. From the point of view of King, both the protest and his imprisonment should inspire the movement and influence the federal government to listen to the demands of the Civil Rights Movement.

Martin Luther King Jr. wrote this letter from jail in response to eight white clergymen who did not approve of his nonviolent protests against racial inequality. He has been arrested and is writing to them from jail about why he did what he did and why he wants them to care.

I thought his words were very persuasive and they ought to have made the church ashamed of itself for rebuking him. He references many historical theologians and biblical characters who would have done just as he has done. His letter is impressive because it is so intelligent and clear. He is calm, though he is in jail for fighting injustice.

He is speaking to them in their own language of their own heroes and that ought to wake them up to the reality of where they stand. In his mind, if they are willing to take such a stance against him, they need to check their own consciences because he believes he is fighting on morality and justice’ side and they ought to be as well.

He talks about how they call him an extremist and at first he was offended, but then he realized what an honor that is, though that is not how they intended it.

First of all, everyone is extreme in one way or another. Secondly, Jesus was an extremist for love and His Father’s glory. Martin Luther King Jr. says in this argument: “the question is not whether we will be extremists, but what kind of extremists we will be.


Today, many years after it was written, King’s powerful message continues to resonate around the world–the letter is part of many American school curriculums, has been included in more than 50 published anthologies and has been translated in to more than 40 languages.

In April 2013, a group of Protestant clergy released an official—albeit considerably delayed—response to King’s letter. Published in The Christian Century, one of the first publications to carry King’s own words, the letter continues King’s call to religious leaders around the world to intervene in matters of racial, social and economic justice.