July 15, 2020
David Foussler is incarcerated for his role in the murder of a wealthy couple whose son, Robert Bryon is the sole survivor. Conflicted my guilt and loneliness, David becomes haunted by nightmares of the murder and suffers a nervous breakdown which eventually leads him to the riveting Ally, his therapist who he falls in love with. They have undeniable chemistry and one day they succumb to their passion. 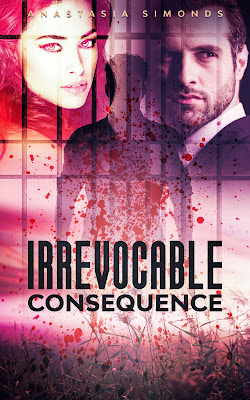 A whirlwind of unforeseen circumstances takes place that separates them but eventually they reconnect and plan a life together when David’s released from prison. But David is doomed... In a terrible twist of fate, David’s unforgiving past comes back to rear its ugly head and to haunt him and he will be forced to make a terrible, heart-rendering decision as he faces the consequences of his actions.

Anastasia Simonds masterfully crafts a powerful yet dramatic novel that exudes raw emotion, will, and surrender. Irrevocable Consequence is a poignant and heart-wrenching tale of redemption and revenge, love, and death...where the losers win and the winners lose.

Get this awesome book from any of the following links: