Beyond Lovecraft: An Anthology of fiction inspired by H.P.Lovecraft and the Cthulhu Mythos by Frank Forte

August 03, 2020
An Anthology of fiction inspired by H.P.Lovecraft and the Cthulhu Mythos. Written by Frank Forte (Lovecraft Country, Conjuring 3, Insidious: The Last Key, Heavy Metal Magazine) this collection of terrifying tales takes us to the edge of the worlds of H.P. Lovecraft and beyond. Lovecraft has inspired writers, artists, video game creators, board game creators, comic book artists and feature film directors. 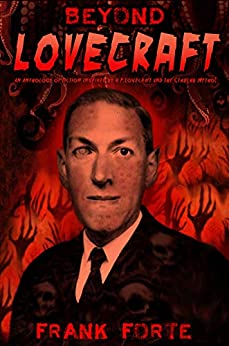 Get this awesome book here - Beyond Lovecraft


The Complete Fiction of H.P. Lovecraft collects the author's novel, four novellas, and fifty-three short stories. Written between the years 1917 and 1935, this collection features Lovecraft's trademark fantastical creatures and supernatural thrills, as well as many horrific and cautionary science-fiction themes, that have influenced some of today's important writers and filmmakers, including Stephen King, Alan Moore, F. Paul Wilson, Guillermo del Toro, and Neil Gaiman.


Get this awesome book here - Beyond Lovecraft

Included in this volume are tales inspired by The Case of Charles Dexter Ward, "The Call of Cthulhu," "The Dream-Quest of Unknown Kadath," "At the Mountains of Madness," "The Shadow Over Innsmouth," "The Color Out of Space," "The Dunwich Horror," "Re-Animator", "From Beyond" and many more hair-raising tales.


Get this awesome book here - Beyond Lovecraft