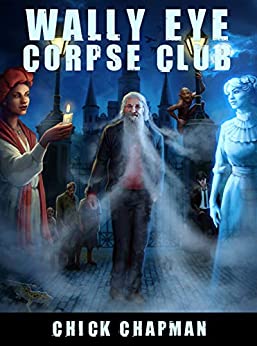 If you miss HBO's True Blood terribly, Wally Eye Corpse Club may be just the medicine you need! The first book in the WECC series, Wally offers readers a campy, fun, urban fantasy that will keep you wanting more! Don't miss Chick Chapman's weird, wild, fun ride!
Get this awesome book here - Wally Eye Corpse Club by Chick Chapman
A brief synopsis that doesn't tell you the whole story:
There’s really no way to carefully introduce you to what your about to learn. The story is difficult to believe. At one point everything just went weird. Strange things began happening, very strange things, even for The French Quarter in New Orleans. Wally Peters, a sixty-nine-year-old former hippie, was at the center of it all somehow. He didn’t even know how deep the murky waters went, but he was in them, floating along, leading the pack.
Get this awesome book here - Wally Eye Corpse Club by Chick Chapman
The first piece of evidence, which you simply must accept as fact, was the club itself. At the club, which is the lower level of Wally’s building and was once a popular bar, are housed thirteen corpses, none of them quite dead, all of them moving about as you or I. Why have they not been terminated and forced to take their final rest? Only Wally really knows his reasons for that.
Regardless, the world of Wally Peters became supernaturally charged. It was suddenly filled with vampires, witches, spirits, and all types of creatures previously unknown to man. Was this an accident that all this happened? Is it a shame that all of this was brought to light? No. It’s not an accident or a shame. It makes for a real interesting tale. Things are about to get weirder in The French Quarter.
Wally Eye Corpse Club is open!
•CONTAINS ADULT LANGUAGE
Get this awesome book here - Wally Eye Corpse Club by Chick Chapman