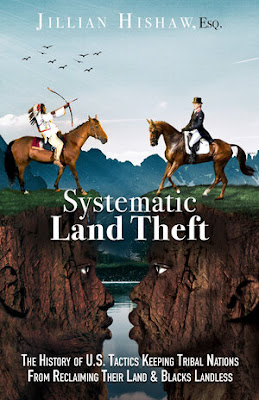 BOOK SUMMARY
This textbook, includes case studies , in-depth policy and legal case analysis along with over 1,000 citations detailing the history of land theft in the U.S.
Whites presently own over ninety-five percent of farmland in the United States through the misappropriation of tribal nation lands and the exploitation of enslaved Africans. As the enslaved African population grew, the government welcomed immigrants from Europe to settle into the U.S., ensuring their majority status.
Get this amazing book here - Systematic Land Theft by Jillian Hishaw
As Europeans immigrated into the U.S., the adoption of English common law created the separation of land into statehood, thus replacing African and tribal groups' beliefs of communal living. The creation of state boundary lines and personal property rights became the foundation of U.S. modern property laws. Due to forced assimilation into the “new” American way of life, the five civilized tribes adopted some European customs...
Get this amazing book here - Systematic Land Theft by Jillian Hishaw