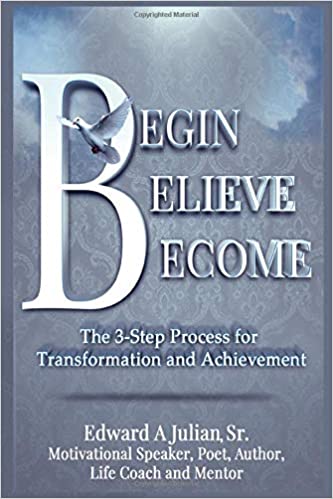 Edward A. Julian, Sr. is an expert in personal transformation and rewiring individuals to create and sustain life-changing thinking and behavior. One reason is that he's done it for himself. After two prior drug convictions in state court, Edward was sentenced to 240 months in federal court for possessing more than 50 grams of crack cocaine. In prisons he began to reshape his thinking into new patterns of self-acceptance, self-development, self-discipline, and self-productivity.
Get this amazing book here - Begin Believe Become by Edward Julian
Having spent 14 years in prison because of his prior thinking and choices. Edward began to shed patterns that could have sent him back to prison, realizing that all change BEGINS in the mind. Instead, he developed a new vision that has transformed his life. Now he teaches his BEGIN BELIEVE BECOME philosophy to others interested in maximizing their potential.
Written from the heart, this book will challenge your thinking, while giving you comeback power. It will help you accept and forgive your past and guide you in the work needed for your own personal transformation.
Get this amazing book here - Begin Believe Become by Edward Julian