Regency Christmas Box Set: Risking it all by Regina Darcy 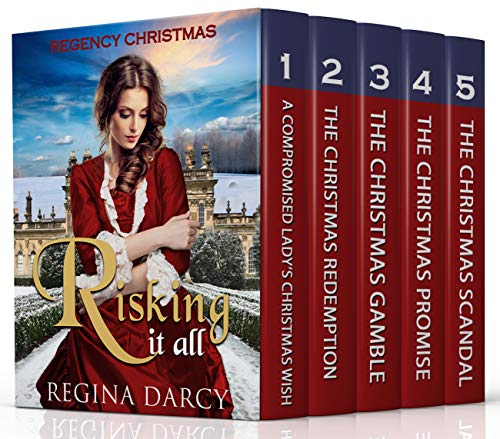 Lose yourself in a collection of compelling stories, where love conquers all. A five story collection, (with 2 new stories never published before) which includes the following:
A Compromised Lady’s Christmas Wish
Lady Christiana is ashamed. She ran away with a rake, Lord Timothy Archibald. He stole her family heirloom, a priceless emerald that use to belong to her mother. She had taken it to have a keepsake of her family whilst they set up their new life. Now she finds herself abandoned, with only her virtue and her name, and she will not run back home until she has her necklace or her name back. Naught but a Christmas miracle will achieve that. Never will she again believe in the sweet words of any man. But destiny has another thing in store for her.
Get this book here - Regency Christmas Box Set: Risking it all by Regina Darcy
The Christmas Redemption
Henrietta Jamieson is on a mission this Christmas. A mission of vengeance for the wrong that was done to her family by, Edward Winston, the Duke of Farringdon. Little did she expect the Duke to be more than a rogue and for her heart to betray her. This Christmas, secrets will be revealed, broken hearts restored and love will conquer all.
The Christmas Gamble
Miss Cassandra Bennet is a vicar’s daughter who just nabbed the most eligible bachelor in London, The Duke of Cantenberg. Pity she had no say in the matter and now she is raking her brain for a way to escape a fate worse than death.
Mr James Dalton is the younger, troubled brother of the Marquess of Dennington. He is not in the business of helping young ladies in distress and especially not during Christmas. The holiday season has a special bitter taste to it ever since his mother’s betrayal. But this Christmas he is about to learn that love works in mysterious ways and if he dares to gamble and risk it all, he just might be favoured by fortune beyond his dreams.
Get this book here - Regency Christmas Box Set: Risking it all by Regina Darcy
The Christmas Promise
Miss Julianna Wade has had the worst year ever. Her father has disappeared and is presumed dead. But things are about to get worse. Her uncle has every intention of selling her and her virtue to the highest bidder, just in time for Christmas. Faced with a fate worse than death she sees no way out.
Every girl needs a knight in shining armour some times.
And sometimes wishes come true.
But it’s a pity when your knight in shining armour is mainly worried about marrying you off. This Christmas a charming rogue will meet a maiden strong enough to steal his heart.
Get this book here - Regency Christmas Box Set: Risking it all by Regina Darcy
The Christmas Scandal
Lady Jemima Hastings, elder daughter of the Marquess of Parkham never expected to be faced with a scandal centred on herself. Then again she had never met a rogue such as Lord Alexander Denhaven. Brought together through a string of foolish decisions and unfortunate circumstances Jemima and Alexander are now faced with unwanted matrimony. But this Christmas, our couple are about to discover that sometimes love finds you when you least expect it.
BUY IT NOW, to find out how it all ends.
Get this book here - Regency Christmas Box Set: Risking it all by Regina Darcy