A Kind of Magic by Ryder Phoenix 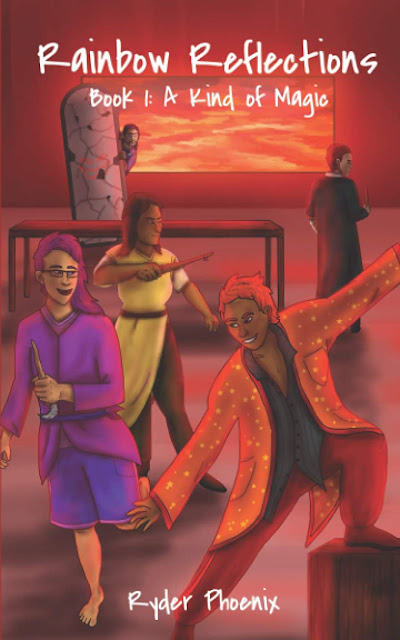 Magic school is about to begin! But will it be everything Zyn and Ren hoped for? Zyn struggles to connect with her magic, while Ren collapses to strange visions. At the same time, Sarala arrives at the school after living wild for years, keeping her past secret from the twins. The first year looks to be an interesting one as the three start learning magic together…
Review
"Rainbow Reflections is a great read for LGBT+ fans of Harry Potter." -Alex
"A Kind of Magic showcases a diverse cast of characters." -Eli
"It's a great book for fantasy readers who want to see diversity." -Raven
Get this amazing book here - A Kind of Magic by Ryder Phoenix
From the Author
Rainbow Reflections  includes many LGBTQ+ characters, giving us all the representation we've been searching for. This story will go beyond the typical coming-out tales, focusing on magical adventures in an accepting world. Finally: A book where LGBTQ+ people are commonplace and aren't rejected for their identities, a story where these people can thrive!
Ever wanted a LGBTQ+  Harry Potter ? Looking for a happy LGBTQ+ story? You don't need to look any further than  Rainbow Reflections !
About the Author
Ryder Phoenix is transgender and nonbinary. They love to write, draw, do martial arts, and play games. Phoenix has been interested in magic probably as long as they've been writing, which was from a very young age indeed. Naturally, a magic-filled adventure was bound to be crafted by this robe-wearing magician.
Get this amazing book here - A Kind of Magic by Ryder Phoenix