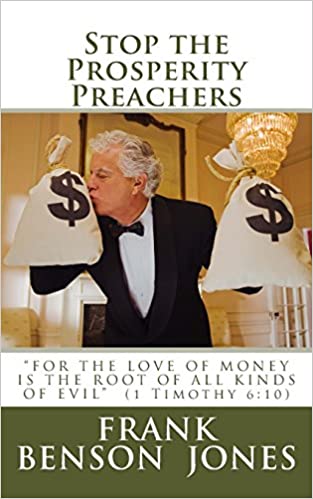 "AFTER THE PROFITS ARE REMOVED FROM THE PULPIT, ONLY THE PROPHETS WILL REMAIN." says Pastor Frank Benson Jones. The pro$perity preacher$ are robbing the poor and cheating America. They can receive very large salaries every year and pay no income tax.
They promise the people who give them donations that those people will become wealthy also, but when those who make the donations don't receive the promised wealth, they are told the problem is they don't have enough faith. The real problem is that prosperity preaching only works for the pro$perity preacher$.
Get this awesome book here - Stop the Prosperity Preachers by Frank Benson Jones
The pro$perity preacher$ live lavish life styles made possible by tax free allowances and income, and they are misusing and exploiting the religious freedom that many Americans have fought to protect and died to maintain.
In this book Pastor Frank Benson Jones offers Biblical proof of the fallacies of the pro$perity preacher$, and in the closing chapters, he offers some suggestions of how the American people and government can $TOP THE PRO$PERTY PREACHER$ from robbing American citizens.
AUTHOR'S NOTE: All Americans are being cheated, so even if you are not a Christian or if you do not believe the Bible, you should read chapters 12 and 13 to see how the pro$perity preacher$ evade paying taxes and how you and the government can stop them.
Get this awesome book here - Stop the Prosperity Preachers by Frank Benson Jones